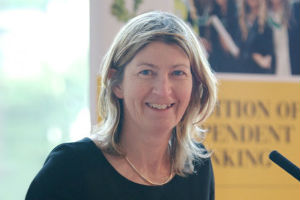 Professor Ursula Kilkelly is a professor of law at University College Cork where she has been Dean since 2012.  Her academic work concerns the rights of children in international law and she is the author of many books and articles on a range of topics.  In addition to her scholarly work, Professor Kilkelly chairs the Board of Management of Oberstown Children Detention Campus, appointed by the Minister for Children and Youth Affairs. Since 2013, Ursula has been Head of the College of Business and Law at UCC, overseeing the establishment of the University’s Business School in 2014.  Since her appointment to the role for a five year term in April 2018, Ursula has responsibility for the development of both the Business and the Law Schools, and is overseeing the integration of the Irish Management Institute, an executive education provider acquired by the University in 2016, into the University.