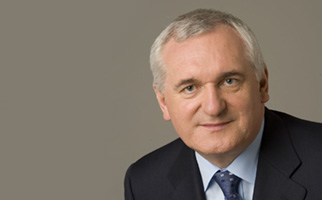 Bertie Ahern was first elected to the Dáil (Parliament) in 1977 and has held several cabinet positions, Minister for Labour, Minister for Finance, Minister for Arts, Culture & the Gaeltacht and Minister for Industry and Commerce at various stages. In November 1994 he was elected leader of his party Fianna Fáil and served as Leader of the Opposition from then until June 1997. He was first elected Taoiseach in June 1997, he was re-elected in June 2002 and again in May 2007.  Bertie Ahern was a key architect of the Good Friday Agreement.  On the wider world stage he held Presidency of the European Council from January 2004 to June 2004  Since leaving Government in 2008 Bertie Ahern had dedicated his time to Conflict Resolution and is currently the Chair of The Bougainville Referendum Commission.