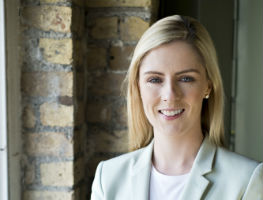 Lisa Chambers is a Fianna Fáil TD from Mayo. Lisa was first elected to Mayo Local Authority in 2014 and was subsequently elected to the 32nd Dáil in the 2016 general election. She was formerly the party’s Spokesperson on Defence having served 13 years in the Reserve Defence Forces and is now the party’s Spokesperson on Brexit. Lisa is a qualified barrister having been called to the bar in 2011. She holds a Commerce and Law Degree from NUI Galway and a Masters in Commercial Law from University College Dublin. Before entering Dáil Eireann Lisa ran her own legal practice on the western circuit. She is a member of the Irish parliamentary delegation to the Organisation for Security and Co-operation in Europe Parliamentary Assembly where she sits on the Political Affairs and Security Committee and the sub-committee on Countering Terrorism. Lisa is also a member of the Oireachtas Budgetary Oversight committee, the Business and Enterprise committee and the Children and Youth Affairs committee.