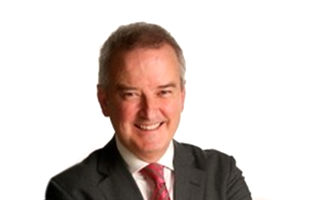 John McGrane is Director General of The British Irish Chamber of Commerce, a private sector organisation which he co-founded in 2011 to represent businesses with interests in the two islands and their economies.  The British Irish Chamber is the only organisation speaking for the businesses and employers of both islands and the 400,000 jobs which the €70 billion annual trade between Ireland and the UK sustains.

He is a retired financial services professional having completed a 40 year career with the Royal Bank of Scotland / Ulster Bank Group in Ireland. His career has spanned substantial initiatives in the enterprise and corporate sectors, both indigenous and foreign direct investment.

He is also Founder of NSI Technology, a tech start-up which helps Not For Profits become Not For Losses.

He plays an active role in numerous business, cultural and charitable organizations alongside his work as leader of The British Irish Chamber of Commerce.