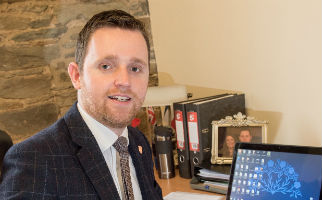 Gary Middleton has served as an MLA for Foyle since April 2015. At the age of 24, he became the Assembly’s Youngest MLA. He has served on the DSD, Environment, Health and Finance committees in the Northern Ireland Assembly and was appointed as Assembly Private Secretary to the Minister for Regional Development.

During the most recent term of the Northern Ireland Assembly he held the position of Vice Chair of the Health Committee.

Most recently Gary has been appointed to the newly constituted Northern Ireland Policing Board.

Gary Middleton was first elected to Derry City Council in 2011 and served as Deputy Mayor from 2013-2014 and 2014-15. He was also elected to the new Derry and Strabane District Council and appointed the DUP Group Leader in 2014.

Before joining the Assembly Mr. Middleton worked in several different roles with NYSE Technologies, NI Water and as a Youth Coordinator at Dungiven and Bovevagh Parish Church. He also worked as an assistant to former Foyle MLA and Speaker of the NI Assembly William Hay.

Mr. Middleton studied Computer Science at Ulster University and has an Advanced Diploma in Civic Leadership and Community Planning from the University.