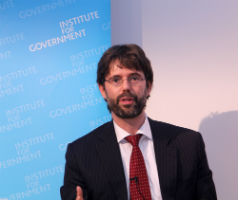 Dr. Holger Hestermeyer is a mid-career fellow at the British Academy, the Shell Reader in International Dispute Resolution at King’s College London and a Senior Research Affiliate at the Max Planck Institute for Comparative Public Law and International Law in Heidelberg. He has served as a Specialist Adviser to the House of Lords External Affairs Sub-Committee of the EU Committee on post-Brexit trade and has written and spoken extensively on Brexit, most recently giving testimony on the Draft EU Withdrawal Agreement and the Political Declaration to the House of Commons Select Committee on Exiting the European Union. Dr. Hestermeyer is a past co-Executive Vice President of the Society of International Economic Law and has worked as a Référendaire in the Cabinet of Advocate General Cruz Villalón at the Court of Justice of the European Union.